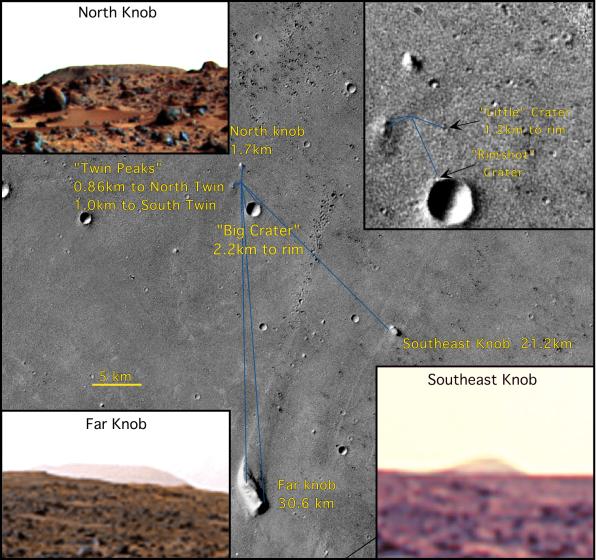 Mosaic of Viking orbiter images illustrating the location of the lander (19.17 degrees N, 33.21 degrees W in the USGS reference frame) with respect to surface features. Five prominent features on the horizon include North Knob, Southeast Knob, Far Knob, Twin Peaks, and Big Crater. Two small craters visible in the orbiter and lander views--Little Crater and Rimshot Crater--lie on the northwest outer flank of the rim of Big Crater. Because the lander is on the southeast-facing flank of a low ridge, very distant features to the south and east are in view, whereas relatively nearby features to the north are partially or completely obscured. Only the tip of North Knob, which appears larger in the Viking orbiter images than the Twin Peaks, projects above the local horizon, and a 300-m crater, 1.2 km to the northeast, is completely obscured. Viking stereo images 004A27 and 004A87 and 004A44 and 004A70. North is up; scale bar, 5 km. (Insets) (Upper right) Lander location. (Upper left) North Knob from lander. (Lower left) Far Knob from lander. (Lower right) Southeast Knob from lander. The location of the lander in inertial space (19.30 degrees N, 33.52degrees W) from the two- way ranging and Doppler tracking of the lander is coincident with Rimshot Crater.