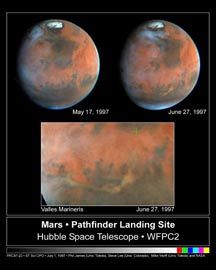 The latest from Mars - images from ground-based astronomers (5 April - 30 June)!

The MarsWatch FTP site address has changed! Please make a note of the new address:

The MarsWatch FTP site
Go there to get full instructions on how to upload your images of Mars for posting on this website.

In order to monitor atmospheric conditions on Mars, we need world-wide help of amateur and professional astronomers. MarsWatch was created to be a clearinghouse for information and images on Martian atmospheric conditions gathered by amateur and professional astronomers world-wide. It is a combination of science and outreach activity centered around observing of the atmosphere of Mars from now to July 4, 1997. Atmospheric observations will be especially crucial during the Mars Pathfinder cruise portion of operations (December, 1996 through July, 1997). If an astronomer observes some anomalous activity during the cruise phase, you can notify us and we will pass on the information to all astronomers. Please click here for more information on how this verification will be done. Any images (including those from the Hubble Space Telescope) acquired during this time will be examined for anomalous activity and included on this website. So join us in making the return to Mars successful, if you observe any changes in the atmosphere of Mars, please let us know.