The cruise phase of the Mars Pathfinder Mission begins with successful launch atop a Delta II rocket from the Kennedy Space Center in Florida in December of 1996. Once in earth orbit, the spacecraft is given a final boost with the help of a solid-fuel rocket motor. This 'kick-stage' gives the spacecraft just the right amount of velocity increase it needs to escape Earth's gravity and enter its own orbit around the Sun. Once spent, the third stage is jettisoned, and we can officially say we are on our way to Mars.

At separation from the upper stage, the spacecraft is in Earth's shadow and spinning at 20 rpm. An onboard sequence of events is activated once the separation microswitch detects that separation is completed. The Deep Space Network (DSN) initiates spacecraft acquisition and lockup activities using a 34-Meter antenna located in the California desert. As soon as acquisition has occurred, the engineering telemetry broadcast by the spacecraft is received on the ground at a rate of 40 bits per second (b/s). This telemetry is a combination of real time engineering data and stored data from launch, separation, and Earth/Sun acquisition. Any attitude errors are corrected after Earth communications are established. If communications are not established within a set time period, then a contingency acquisition sequence is executed autonomously by the spacecraft.

The spacecraft automatically determines its orientation in space by first determining the location of the Sun with respect to the spin axis of the spacecraft using a Sun sensor located on the top of the cruise stage. This procedure, known as Sun acquisition, will provide the spacecraft with the information it needs to reduce the spin rate from 20 rpm to a nominal 2 rpm. After the spacecraft has cleared the moon's orbit and safely spun down to 2 rpm, the star scanner will be activated. After star identification has been confirmed, the Attitude And Information Management (AIM) computer will then calculate the spacecraft orientation. Once the attitude is determined, the spacecraft can be commanded to change its attitude and move the spin axis closer to Earth if needed.

The Interplanetary Path To Mars

Mars Pathfinder uses an Earth-Mars transfer orbit with a launch period starting on December 2nd, 1996 and ending on December 31st. Regardless of the launch date, the spacecraft is scheduled to arrive on Mars on July 4th, 1997. The total flight time from Earth to Mars takes 6 to 7 months, depending on the launch date. The figure below shows a view of the interplanetary trajectory as it would look from above the Sun.

During the 7-month cruise to Mars, a number of activities are performed to maintain the health of the entry vehicle, lander and Rover. Navigation is required to maintain the flight path, and the various spacecraft subsystems are monitored and adjusted as needed to keep them operating at peak efficiency. The table below shows the timeline of events from launch to Entry, Descent And Landing (EDL) at Mars. 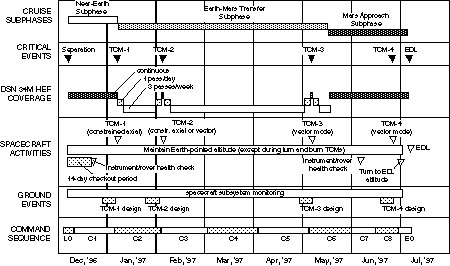 Cruise activities begin once we are safely out of Earth orbit. After the attitude is established and the spacecraft is determined to be healthy, the flight team begins a two-week initial characterization and calibration period. Systems to be characterized include the solar array and battery, thermal control, attitude determination and control, and the communication subsystems. The primary spacecraft activities during the first month of cruise are collection and downlink of relevant engineering telemetry and tracking data, initial spacecraft health checks and calibrations, and attitude maneuvers to maintain the correct Earth/Sun geometry. One health check of the Rover and Science Instruments occurs at launch + 15 days.

Measurements of the spacecraft range to Earth and the rate of change of this distance are collected during every DSN station contact and sent to the navigation specialists of the flight team for analysis. They use this data to determine the true path the spacecraft is flying, and determine corrective maneuvers needed to maintain the desired trajectory. The first of four Trajectory Correction Maneuvers (TCMs) is scheduled on January 4th, 1997 to correct any errors collected from launch. The magnitude of this maneuver is less than 75 meters per second (m/s). Navigation is an ongoing activity that will continue until the spacecraft enters the atmosphere of Mars.

After TCM-1, the flight team transition from a 'spacecraft checkout mode' to a more routine 'spacecraft monitoring mode'. DSN tracking coverage is reduced from 3 contacts a day to 3 per week. Spacecraft health and performance telemetry is downlinked at 40 b/s or greater during each tracking pass.

A key activity during cruise is the designing and building of command sequences that dictate to the spacecraft how it is to perform each of the activities required. Each cruise command sequence is generated and uplinked approximately once every four weeks during one of the regularly scheduled DSN passes. The uplink generation process requires 14 days for planning, sequence generation, verification, and commanding.

Starting 45 days prior to entry, tracking is increased to 3 passes a day and the flight team steps up its preparation for atmosphere entry and landing. A final health and status check of the instruments and Rover is performed at Mars-30 days. A fourth and final trim maneuver is performed at M-10 days (June 24th), requiring less than 0.50 m/s. At M-5 days, the spacecraft performs a turn to the entry attitude, where it will remain until atmosphere entry. The roll thrusters increase the spacecraft spin rate from 2 to 10 rpm for entry. At that time, the cruise phase ends and the flight team transitions to the entry, landing, and surface operations phases.

During the final day of approach, the navigation team is producing orbit solutions on a regular basis, and adjustments are made to the computer programs that determine when the parachute should be deployed. At 6 hours out, the final adjustment is made, and the flight team makes final preparations for atmosphere entry.

Back to the Mars Pathfinder Home Page.